This is a must watch:

And visit deusmatic also sometime if you are bored :D for awesome free games!!!

Posted by Rajesh at 5:37 PM No comments: 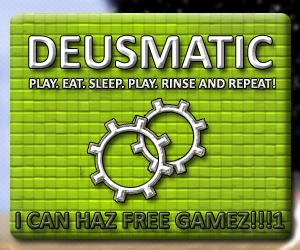 Its been a while since my last post. This is due to the fact I like making games more than writing about what I've done or doing. So anyway, I started a little Flash game portal and was exploring ways to also support HTML5 games so that I could target Ipad users as well. However I ran into a number of bottlenecks, besides the fact that Mochi does not support serving ads on HTML5 (Forcing me to only show Google ads) which affected my monetization methods (Not a big deal 'cause I don't really give a rats ass about revenue atleast right now). I did however run into a NUMBER of technical bottle necks. SAFARI on the Ipad runs canvas at snail's pace. This really shot by blood pressure up a few notches because Steve Jobs said that Flash wasn't on IOS devices because it according to him drained battery power really fast and underperformed. This is absolute bollocks because Flash runs perfectly fine and better than that piece of shit browser Safari on a jailbroken Ipad and besides Flash runs perfectly on a myriad of mobile devices. Steve tell me, why can't iOS devices run what many devices run perfectly? There are a lot of flash games out there for free that are of substantially higher quality than most paid-for Apple appstore games. Anyway right now, HTML5 performs OK on browsers like firefox and chrome and even IE9 to a certain extent. But can I port some of my existing flash games to HTML5? Possibly but its just not worth it because HTML5 runs like shit on the IPAD and the only reason to make HTML5 games right now is if you wanted to target the IPAD, IPHONE etc. Flash runs perfectly fine on Windows, MacOS and Linux. I test my flash games on browsers on all these operating systems. MacOS performs the worst generally but then again even MacOS native games run crap compared to windows. (Ever tried Quake4 MacOS vs Quake4 windows?). I don't want to come off as a MS fanboy but with Windows 7 and DirectX 10/11 and the developement environment for windows, makes windows an outstanding platform followed by Linux. Linux is amazing too, atleast for programmers :D. Anyway I'm sticking to flash and oh, I almost forgot to mention. I started a little Flash Game portal and I'm enjoying developing.

P.S. This is not a shameless plug for my Flash game site thing :D What the hell I care if you think otherwise? :D
Posted by Rajesh at 3:32 PM No comments: